Children should be outdoors as MUCH as possible. Getting their hands in the dirt - the soil of the earth from which their bodies were made. Creating from the produce of their sweat, toil and God's graces.

The emotional and spiritual benefits can't be measured, but are astronomical (literally); and the benefits to academics and psychology is almost as wonderful.

These things begin in the child's youngest days of life, and will come to greater meaning in adolescence. We are almost there! Yikes! The end of the elementary years... and the beginnings of adolescence. Age 11 and 12 are kind of cross-over years as hormones start kicking in and the child's plane of development changes.
More information on the planes of development - sensitive periods.

So here is a tiny snippet of what we have been able to do of late - not near as much as what we are planning in the near future!

We haven't exactly weeded the garden this year. Ever.

In May, the landlord came over and tilled the soil from last year's garden; we planted our few surviving seedlings immediately; most did not survive; and we ordered more seeds to literally SCATTER (and cover with some worm compost). June 7, we planted 28 "mystery tomatoes" from a friend who was selling them at a farmer's market - they had lots the tags on them, couldn't identify them, nobody would buy them, so we bought for a bit less than half-off, in exchange for some canned tomatoes down the road. Awesome stuff. 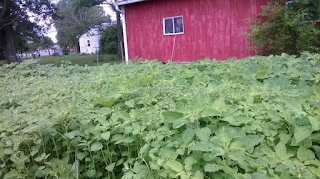 Turns out that worm compost had some undigested tomato seeds - so we have a few extra tomato plants mixed with the pumpkins and watermelons. Hm. Extra treasures!

No asparagus, rhubarb and a few other things we'd planted. :( This just wasn't the year to FOCUS on the garden - the goal this year is to prove that we can, get our hands dirty, have some fun and see what happens. Better planning for next year! 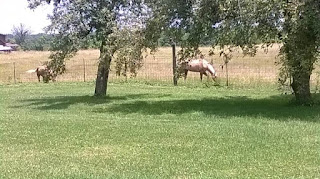 3 hours, 4 blisters between the two of us, a homemade scythe (loving having an 11 year old male child), and a bit of a sunburn later.... WHEW.

The next day - strawberry picking with this adorable princess: 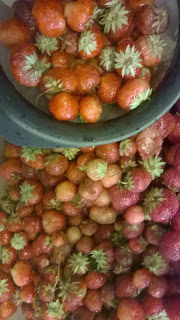 Taking a walk afterward.
Think Linus. Lack of bath and all ;) haha!

What do I not have photos of?

Climbing trees, playing in puddles (yep, he still does it!), planting the lilac bushes, weeding the mulched areas, setting up our statues, just chilling in the backyard, and a bit more.


We are getting realizable plans together to move again - maybe not for another year, though - to larger property and start a Montessori farm school experience. Exciting!!!