When I was working on my child development degree, there was so much talk about "literate environments." Most of it made sense; but I have to admit, a good deal of it was so utterly contrived.

And then I met a little girl. She was this sweet little thing with something of an "uppity" attitude. The other teachers at the daycare were relatively annoyed with her, but they "put up with her". This sounds worse than it was; let's just say they didn't think much of her personality most of the time. She was 3 when I met her and 5 when I last saw her.

NOT because of the "uppity-ness" which was mis-construed. In reality, it was a sign of normalization among children who were not normalized.

She reminds me of homeschoolers because she had a VOCABULARY. She didn't say "kitty and doggie" - she said "kitten and puppy" (and even those words she said in a sweet little voice that just made your heart melt!).

She used the word "persnickety" to describe another child's bristliness after nap-time. She was 3 1/2 at the time. And she was spot-on!

She could describe nuances of color to you - if it was gold, it was NOT yellow; and it wasn't just gold either: there could marigold, antique gold, tarnished gold, pyrite gold.... these were HER descriptors.

She loved play on words (sounds, rhyming, songs), was trying to start reading at age 5 (hindered by the environment we were in).

She had little interest in "pure fantasy." It truly turned her off (this is where part of the uppity label came in. She would say very politely, "This book just isn't for me; thank you."

Honestly, I can't believe the child didn't go to a Montessori environment.


She had parents who developed an environment at home that centered on the following:

Included in all of that, as part and parcel:

So yes, she had a Montessori environment at home. And it was language-rich, and rich in so many ways, because it was an intentional environment that met her needs.

Not because it was contrived.

Now, her mom was an artist and her dad a musician. So, before we start worrying about lack of creativity because she didn't want anything to do with pure imagination, let's consider that she was still in the first plane of development where she's not supposed to be drawn into those things of her own accord; and that her parents certainly would have been encouraging creativity and imagination in appropriate ways.

I wonder if they ended up homeschooling her.... :)

So how do we create literate environments as Montessorians?


Posted by Jessica at 7:30 AM 2 comments: Links to this post

It is back to school time and my input is usually sought right about now, so I thought I'd time this post to coincide. Also see my other post on back-to-school deals that fit with Montessori.

Now, all of this is just my experience and/or intuition - please share your own ideas here too!

Every Montessori school, just like any other school, has varying capabilities to offer their children the supplies needed. Most children receive a "supply list" before school starts of the items they will need to provide. For as many Montessori schools are out there, you have as many supply lists!

Typical items might include the following:
(everything listed is presumed "if the school does not already provide")

Most of the following is for elementary and adolescence, and presumes there is a classroom set of each item, as well as these individual items for quick access, and for use on Goings Out.

You might also put out a general donation list to each of the parents to see if they have access to items you're not aware of yet.

And if you are a homeschooler? Check all of the above :) I have previously posted on Target dollar rack deals. If anyone again sees the miniature globes they put out a few years ago, please DO let me know! I want to stock up!

Posted by Jessica at 7:30 AM No comments: Links to this post

Montessori and Life of Fred

We have not yet read through *all* the Life of Fred books, but here is what I can say for the ones that we have used and where they fit into our AMI Montessori albums:

Elementary series of 10 books:
Interestingly enough, these sets, along with the Fractions and Decimals/Percents books fill in just about all the "missing" mathematics components listed in state standards but not emphasized in Montessori.

I can't yet speak for the high school texts. We will likely acquire them in a few years when my son is older, but not quite ready for them, to have time to peruse them at that time :)
ETA2: We do have some of the high school books now. It will be interesting to see where they fit in with this Montessori child ;)
As a 3rd year elementary student, Legoboy really gets a lot out of Fractions but is not quite there with Decimals & Percents - he is only just now starting the decimal fraction Montessori material. Once he gets that under his belt, I think Decimals & Percents will take off.
With that said, he LOVES to read the high school books for the story line; the math does trickle in a bit even though he's not "there" yet with Calculus ;)

ETA: I should point out for anyone for whom Life of Fred is a new idea: the books are silly beyond belief! The subtitle for the Fractions book is "As Serious As It Needs to Be" - and in this case, means hardly at all. It turns out math can be silly and fun and STILL be educational!

9/11/15 UPDATE: Now that Legoboy is a 6th year elementary student, he is on par with the above recommendations, he has completed Decimals & Percents and he will begin Pre-Algbra with Physics in the near future (he has other subjects to focus on just now).

Posted by Jessica at 10:48 AM 5 comments: Links to this post


It has now reached the time for my son to start calligraphy. It's just that age.

How did we get here?

He's been studying ancient civilizations for 2 1/2 years now, starting with Ancient Egypt and Old Testament peoples and branching out (and back and forth) from there.

That was in history.

We incorporate art into all of our subjects, but he also does a program called "Christian Heritage Art" which has 6 lessons per "level" that are historically-based - recently he created his own coat of arms (and a few weeks later "updated" it to ensure it was an accurate portrayal of his life).

In language, we have recently reviewed the Great Lesson on the Story of Communication in Signs - he'd already been creating Hebrew, Egyptian, Greek and Chinese alphabets, among others. 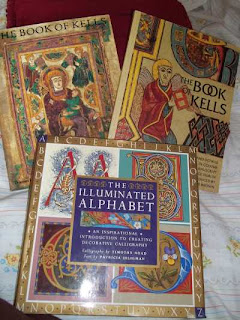 Also in the area of language, his beautiful handwriting has become a bit... sloppy-ish. Yes, we Montessorians keep the children on lined paper longer than typically thought necessary because it helps to train the hand, but he was doing great with both types of paper...

It is all coming together (hint, hint: cosmic education - nothing is studied in isolation).


As part of his other studies, I finally pulled out the Book of Kells (we have two) for its historical value and for inspiration - and I purchased a book called "The Illuminated Alphabet: An Inspirational Introduction to Creating Decorative Calligraphy".
I also already have a calligraphy how-to set that I'm not altogether pleased with, but it does come with ink, pens with various nibs and markers.

I'll be honest - there is NO how-to calligraphy or how-to illumination book that is "perfect" - you'll have to find one or a small number that work for YOUR purposes. For my purposes I am in the process of creating calligraphy command cards similar to the Montessori geography command cards, biology command cards, etc. to take children through the process step-by-step - and then they have these other guides to expand or just provide some ideas for where their work can go.


And the child is inspired.

He is creating his own mini-version of the Book of Kells - and has been a boy on pristine behavior-run so that he can EARN the right to begin the early steps of calligraphy.

What BOY do you know wants to EARN the RIGHT to do calligraphy?

This is a Montessori child, through and through!


He has been studying the history of illumination (and has been allowed to "doodle" (embellish) his paper-works since he was 4), recognizes the similarities of European calligraphy with Chinese and other far-eastern cultures' writing styles, appreciates the historical "lack" of paper and how precious anything written was (not like today where you can buy a grocery bag of books at the library for $2), therefore appreciates calligraphy and illumination as the beautiful art-forms they are --- and he wants to participate in this long history.

Note on the sloppy hand-writing - it is generally sign, that if the other preparations have been made, the elementary child is ready to learn calligraphy as an historical "grown-up" form of writing. He is now participating with his ancestors. Not to mention that the first stages of calligraphy (shaded writing) require slow, careful control - so it brings more attention back to the hand and regular hand-writing should improve as well.