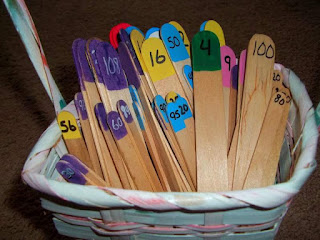 I got tired of the paper/cardstock arrows. So thin, they slip around, hard to pick up when the focus should be on counting. They get *lost*.

The file I original used has two of the colors switched; I was able to change them (after I'd already printed the wrong arrows), then ran out of ink so had to wait. One thing leads to another, years have passed and the children are just making their own arrows out of paper for those two colors. I tried to print them again, but lost the modified file and don't have Adobe that lets me modify things anymore (and don't want to pay for it). Yeah. Craziness.

I kept saying I was going to switch to popsicle sticks.

Well, I started making the Keys of the Universe elementary Montessori mathematics videos - and my mission is to work on the corresponding materials as I get to the videos that need them. So there you go - or there I go. A simple project that became a big deal when it sat in my living room for months ;)

This material is indeed very easy.

What do you need?

I chose to paint just one end - just on one side at first; but I found it was easier to sort them and use them with the bead chains when the color was on both sides. So the *number* is currently only on one side (could be on both).

They still work for elementary. Will have to test for primary.

A video from elementary:

A Day in the Life of a Montessori Homeschool Boy 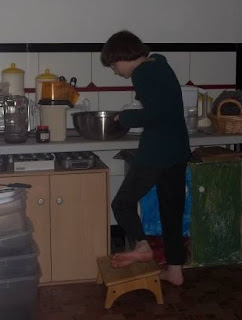 Our days have been looking more unschoolish as Legoboy gets older. Not just unschoolish - but more "practical". Like making popcorn - daily. ;)

Some previous "Life in the Montessori Homeschool" posts - just a sampling of what Montessori life can look like:

A Day in the Life of Legoboy

Elementary - Sample of Our Day - 2012 - towards end of lower elementary


Posted by Jessica at 8:30 AM No comments: Links to this post

Montessori House has been on my radar for a while. The author and I are in the same Montessori "team" on Etsy - and I have had to defend her right to utilize the team tag "TeamMontessori" on her albums.

The author has AMI training and has organized her AMI albums for use by parents and teachers. What she offers is authentic - with some caveats.

I do have fundamental disagreements with a few areas of Montessori House:
Still - what is there, should be quality.

Last week, I finally purchased the infant and toddler binders for my own use.

Some of my own Montessori background:
No Assistance to Infancy training is on my horizon at this time --- and the resources I have accessed have been much less than stellar (ahem - Montessori from the Start - I will post a review on that book soon - I don't recommend it anymore! I only used to recommend it with caveats.). I did use Montessori from the Start but set aside so much from it - and felt guilty for doing so (more in the upcoming post).

I have been loving my recent discovery: Susan Stephenson's book The Joyful Child for children ages 0-3. I have a review post coming forth on that one too - I will only say here that my only caveat is the lack of some material descriptions.

I started to write my own guide based on my own observations, readings, experiences, etc. It would have been awesome; but The Joyful Child takes care of a good deal of what I wanted to put together - and the remaining bits could be gleaned from Montessori from the Start, but still the separation of wheat and chaff was hurting me.

Thus, I took a chance on the Montessori House Infant and Toddler binders. Spent $80-something after shipping. Then I read some reviews from others in a Facebook group, posted right after I ordered. I was doubting my purchase. Very concerned about the wasted money. There was one good review but she said she didn't want a lot of background/theory (and that portion is needed!). 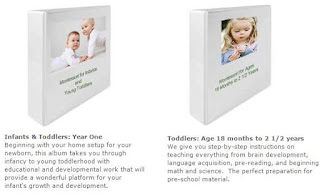 YES! Just enough theory/background to get across the points without being overwhelming and spending hours upon hours of reading. And straight-forward material descriptions.

And the emphasis on OBSERVATION! Phenomenal! Even places to record dates, notes, reactions, etc!

Not a downside or a caveat - but just a point of interest: These albums are written pretty much without emotion; there is little in the way of wordy explanations. It is very much "here is the idea, here is why it works, go observe!" Some people may be put off by that, but just read it as a factual document and all is well!

One issue noted by the Facebook group reviews: a lack of structure, finding some of it "vague and disjointed" - I have that part covered below ;)

Of course I have my own personal caveats - personal to me, but also from my professional perspective. I thoroughly stand behind the infant album (up to 18 months). In the toddler album (18 months to 2.5 years), here are some of my tips:

Overall, these two Montessori House binders, taken together with Susan Stephenson's lovely, parent-friendly gentle book The Joyful Child, will provide all that you need for an awesome Montessori infant and toddler home experience! What the one lacks, the over fills in!

These two resources for infancy and toddler - transition readily into Keys of the World for 2.5-6 and Keys of the Universe for ages 6-12.