God with No Hands - Some Follow-Ups


We first did the Story of God with No Hands when Legoboy was 5 1/2. He was just very, very ready for it!

But many people wonder - what do we do after? Follow the child? But how? What materials should I have ready?

Don't REQUIRE anything. Let it sit. Let it fizzle. Let it percolate. I promise in most cases, you won't be waiting long! If at all!


My son's original interests were in the volcano (go figure!) but he didn't get into the parts of volcanoes like most children - he wanted to know about types of volcanoes, which necessitated learning some of the parts, but in a different way from a child who wants to directly know that information - and where active volcanoes sit today - and where inactive volcanoes sit. And could one be where we live. We then got into Pompeii. And two years later, our local museum hosted the Pompeii exhibit! Oh my! It was WONDERFUL! We went twice! He had other minor questions which were not as polarizing at the time.

And we moved into the other Great Lessons, instigating a study into ancient history. We began reading through Mystery of History in our own manner - reading a "lesson" each evening, creating an index card for it, then he could select any of the suggested activities from any of the listed age groups to do during school time in the coming week. Well, 2 1/2 years later, we've not quite finished the book because this study branched into Ancient Middle East, Ancient Egypt and Ancient Greece - leading to a study (when I say study, I mean reading lots of books and watching videos and having lots of discussions) of the multiple gods of their religion, leading to an interest in astronomy because of the connections of all those names, leading into a study of clocks and time-telling through history, back into astronomy. And then back into Ancient Civilizations (only reinforced since joining the level 3 atrium a year early). He really has little to no interest in modern history. Ah yes, then he discovered there were more suggested activities in Mystery of History, so he's gone back time and again to review the past stories and add more work in. 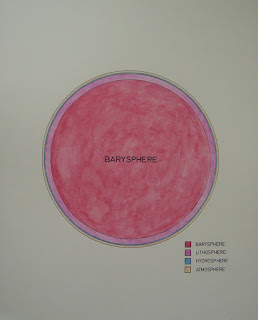 At 6 1/2 to 7 1/2, with 2 more tellings during that time, the focus shifted to the layers of the earth, mostly focusing on different types of rocks. Here, he went back to the volcano to discover types of rocks around different types of volcanoes and the use of some of those rocks. Pumice and its uses; some volcanic rocks are great for closet deodorizers - put them in your closet or a polluted area, it soaks up all the smell and pollution and gets really heavy - put it out in the sunlight and the sun's rays burn out all the pollution and you can use the rocks again and again and again. He told me, "Let's buy me a bigger pair of shoes, so I can keep a stone of this stuff in each toe!" (he has raunchy-smelling feet!). I am purposely not telling you the name of this rock so you'll go look it up yourself ;) Isn't it interesting this type of rock would be spewed forth by the very volcano that it helps to "clean up". Kind of a nice balance to nature there, eh!?

Since then, he still continues to come for re-tellings of the original story - told just the same as the first time (with glass test tubes now) - and now he ponders questions of morality: how all these particles have particular laws, obey those laws, and the human race has these choices even though made from the same particles as everything else. He also ties in elements from the later Great Lessons and his own personal research, relating the particles to the planets, or to human peoples and their various methods of migration. His follow-ups these days are not as distinctly coming from just this one lesson, because he has the grand overview, told many times in the last 3 years and he is making connections and discoveries.


In upper elementary, children explore other creation stories and make comparisons, exploring how the culture and their stories tie together - what do all of these stories reveal about the Truth and about the ways of life of the people holding to their own story. At this time, it might be feasible for a child to re-write the Great Lesson, modifying it. Or they might enjoy coming back to an old friend.