We had a fun morning exploring all of our "new" materials and it was too much for just one post ;) 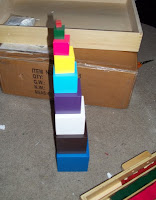 After building the pink tower with the cubing material:

He finally asked me, "So what is this material for?" He has seen it at work in a classroom but it has been a while and he was not yet ready for it. He has been working with the early squaring and cubing and playing the decanomial games and calculating the values of pyramids and towers (with the bead cabinet material). So now we are on to something new.

I challenged him (before doing the actual album page) to construct one cube into its next cube.

Little secret - shhhh! Don't tell Montessori "purists" (of which I consider myself one, but with a different definition)... but Legoboy has not officially done the work with building from one square to the next square! Ahah! I have RUINED MY SON! Hahahaha - not really! I have followed an interest, in the moment of pure joy over discovering he already knew something about this material, helping me organize it - now is the perfect moment to introduce the concept!


Well, he tried all sorts of ways - some with relative success - some were just tedious and annoying (a wall of 1s) and he started figuring out where he could exchange squares of 1s for squares of larger numbers. He was presenting a series of problems (issues) to himself - knew I had an answer, so he continued to keep working, to 1) see if he could figure it out himself and 2) see if he could formulate the right question to get the answer he wanted (he knows I don't easily answer questions - that I am going to guide him in his thinking anyway, and he finds it "easier" to do as much himself first ;) ).

Yes, I then presented him with the actual album page presentation.