A Week in the Life of Legoboy: Wednesday - Upper Elementary Montessori

Wake-up - he wants to snuggle with me for a bit (morning prayer) then play "throw me off the couch" which is where he requests and begs and pleads that I please throw him off the couch or down the hallway or (his newest one) "throw me down the stairs" - all to help him wake up. NO I do NOT do these things, though sometimes I will ROLL him off the COUCH. He is always so disappointed.

Speech at the local school - He is still has speech therapy for his /r/ sounds (minimally on /ch/, /j/, /z/). Note to all other parents - when your instincts tell you something is wrong with your child, don't let any evaluation or expert tell you otherwise. I was told he was in normal range until age 4 and the waiting lists for therapy were LONG at that time. Now, 6 years later, we are STILL at it. This is so much easier addressed with little ones.

Breakfast - cold pizza. Some days I should call him "Pizza-boy" instead of Legoboy ;)

piano practice - just review of past lessons. He's not been practicing as much lately, so needs to get back into it if he wants to move ahead (which he does - he keeps saying when listening to particular selections, "I want to play like THAT!"

Friends over for some elementary math tutoring - he helps or distracts depending on the day - today he helped - long division ;)

errands to the parish office - taking over a jumpdrive with a St. Nick video for the priest and a Sedia image for the CRE

Primary Grade Challenge Math - chapter 8 - "How many legs?" (lots of multiplication, intro into squaring/cubing/powers, careful step by step work)
He threw a fit about not having his facts memorized - he gets them, then he loses them - a throwback to not utilizing the memorization sequence properly in primary. 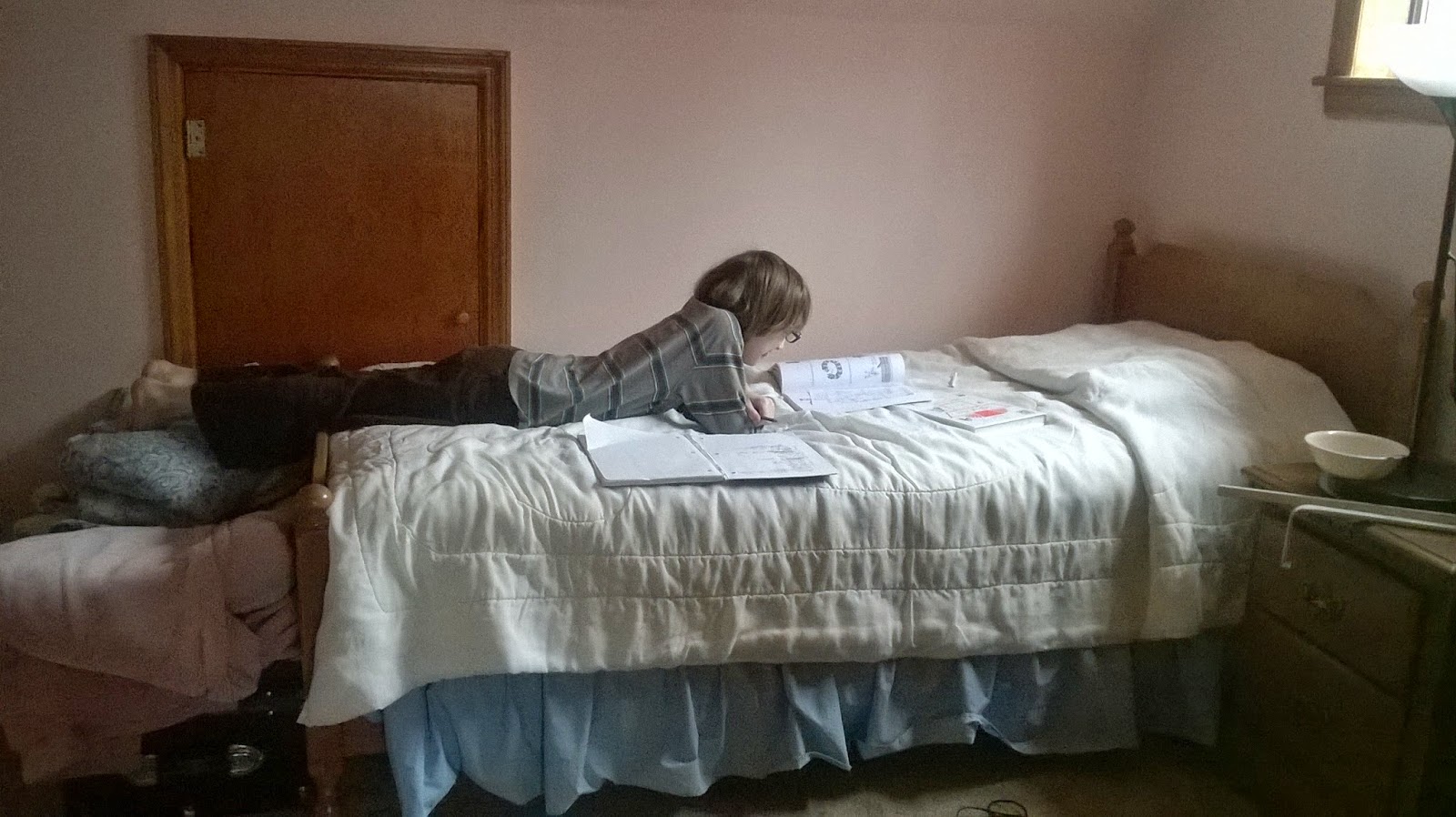 He also likes to rush through; with this work he needs to slow down and look at each step. He continues to do the math accurately for what he sets up, but continually skips a step from the original problem in his "rush".

more piano practice
He really wants to sound "excellent". He has not progressed too far, but is going back to more thoroughly perfect previous lessons.

Electronics - try out more ideas from EEME Dad's e-mail - and create more circuits, finding the one that makes the brightest light.

Confirmation notebook card - continuing work, reading from the Catechism of the Catholic Church and noting key concepts about the sacrament of Confirmation itself.

help clean up basement - sand spilled on the stairs, more baking soda for the old oil smell (from the oil heater that has now been replaced) and (shhhh! don't tell him!) we are looking to convert one half of one of the basement rooms into a tae-kwon-do practice area.

Magician's Nephew notebook and lapbook - slow but steady progress. He loves the stories and he really wants to do these studies, but they are just NOT as interesting as they could be. If these were ALL we were doing, we could probably focus on pulling in more interesting resources for the suggested activities... and they're not UNinteresting - it just doesn't pull together as well as we had hoped. He is adamant he wants to do it though. I think his goal is to DO it, then write his own version! We have been SLOWLY working on a Narnia cookbook of our own, since the only one published is currently not in print, unavailable at a reasonable price and the company refuses to re-print it, despite a list of over 1,000 purchasers --- because they say "last time we printed, it did so poorly" - well, the last time they printed was before the recently-made Disney versions of the movies, which only incite more interest.... people are BEGGING the company for a re-print. Seriously!? They won't re-print. Bad business practice, folks.


Battling invisible enemies. Yep. Our home is a safe, that is for sure - thanks to my valiant warrior. Today's weapon of choice? a curtain rod. Sigh.

Honey for a sore throat. Yelling at the bad guys will do that. 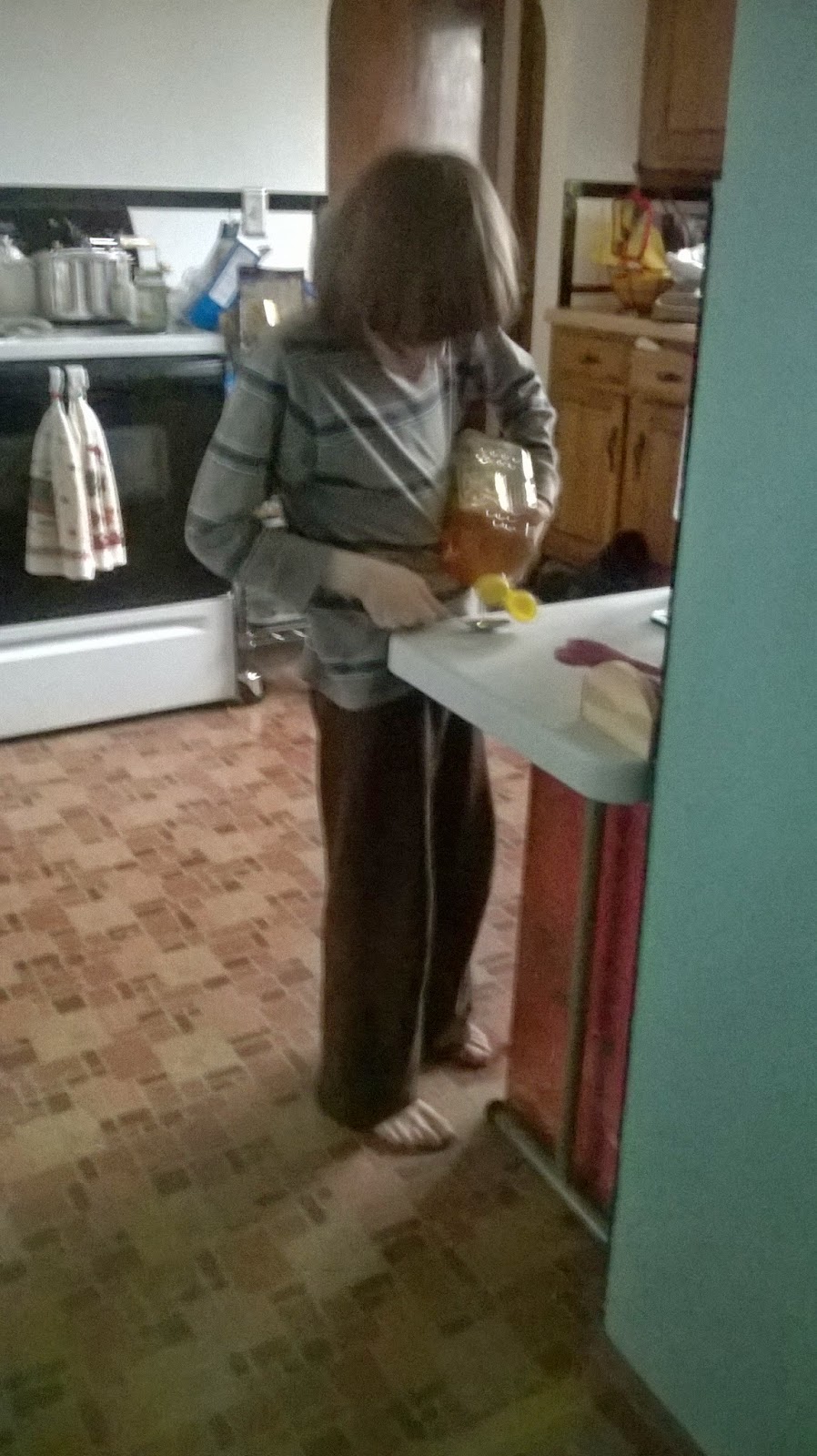 Free-time:
Legos. Why not. Then...
"Legoboy, what are you diong?"
"Eating! Reading math!" I hear his voice from the library.
I truly thought he said "Reading! Eating Math!" at first. Not an impossibility.


Evening Mass for him while I prepped for atrium; during atrium this evening he helped a bit with the level 1 children, but apparently mostly sat in the material-making room doing pencil fights with himself and napping. He was supposed to either play Minecraft, work on Consecration in Truth or offer further assistance. He does not join Wednesday evening level 3 atrium because I already have too huge a class and he attends on Thursdays in addition to helping me prepare materials and our home faith studies.

After atrium he spent time with friends while a few catechists worked on a project.

Dinner Prep: Back at home, we made alfredo sauce with pasta, mixing in a bit of leftover Thanksgiving turkey. I love having his help in the kitchen and typically require it. We are a family - we do things together. He participates in all aspects of meal preparation to varying degrees on varying days. Sometimes he might put an entire meal together himself (he IS 10 and has been helping in the kitchen since he could sit in the sling and dump stuff into a bowl for me; and setting tables since he could walk while carrying an object) - most days we work together and I give him the opportunity to work on different aspects of meal preparation, so that he has experienced all of it, has practice with all of it, but in bits at a time. Then, when he started with simple entire meals, he had the confidence to know when to ask for help and when to get creative in problem-solving.

Now we are researching models of Jerusalem together.
I want this for our atrium:

Now if we could just find an affordable replica of Jerusalem - the entire city itself. I want something 100% accurate. We have representations in the other atriums, these older children want to really see it - experience it.


He fell asleep right at midnight, trying SO hard to stay up until midnight so he could open the next door on his Lego Advent calendar. Oh well - maybe in the morning ;)

Note on bedtime here: we do shift to a later than typical schedule - because of our evening activities and the desire to unwind at home before bed. We typically do not have morning activities (speech is at 9:30, so late enough we don't need an alarm; Sunday mornings we have atrium and do set an alarm; Tues-Fri he has the option of setting the alarm to be up for early morning Mass - some days he does, some days no). In the end, he sleeps no more than a child of his age SHOULD sleep (which yes means he probably gets more sleep than the average 10 year old in our area - they too have evening activities AND some have to be on the bus between 6:40 and 7 to be starting school by 8am).

This week is an exception because of how it started, but typically he is in bed by 10 (Tuesdays at 11:05).