Decimal Fraction Board - when to start

Here's a question I am asked a LOT - whether this particular material or others. And most particularly those material that in reality bridge lower and upper elementary, making that "break" between the two ages within some albums cumbersome at best.

(this particular material has been asked about 5 times in the last month alone, hence I pick on this one ;) )

First "years" - definition: my numbering of "years" assumes the child will have the opportunity for a full 6 years' worth of elementary Montessori. If this is not going to be the case, then it can very roughly be considered as equivalent grade levels - in the US, a 6 year old is 1st grade; 7 year old is 2nd grade; etc. as of the beginning of the year.

When should a child start the Decimal Fraction Board?
It's really whenever the child is ready and depends on how strong was their primary and earliest lower elementary experiences. My albums have them noted as beginning between years 2 and 3 - so definitely starting in lower elementary. Year 2 if they have a very solid foundation or catch on quick; and year 3 to begin if if they needed a lot of remedial work or have teachers using albums that don't have the same foundation OR just plain don't have interest in fractions enough to get them there until year 3.
Anecdote: my son was voracious about fractions and I thought he would get to this work early - NOT SO. He took a seriously long break from all things fractions, but applied what he knew to real life, and only recently (year 3!) has come back around to fractions-study in general - and now he is starting this decimal fractions work. He had a bit of an intro to it because of a strong interest in money in years 1 and 2, but this material just wasn't cutting it for him. I backed off and now he's going at it full-force.

This is one of those works that shows how difficult it can be to delineate between lower and upper elementary ;)

Shortly after working on this material, a few months, a year, maybe even days if you have a child for whom this material truly connects, you'll move the child on, at the right time, to the decimal fraction checkerboard: 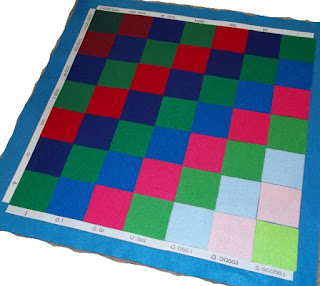 By the time, they have the decimal fraction board, they have typically had the regular multplication checkerboard, and it is now just a matter of merging a few concepts. Wait until the child has each of the concepts down pat - or if there is a struggle, the particular type of struggle would be addressed with a synthesis - and go for it. The introductory lesson itself (just laying out the individual square of felt) will be enough to tell you if the child is ready or not.

Thus the Decimal Fraction Checkerboard is potentially a lower elementary work as well - indeed, upper elementary prefer to use fewer beads, so introduce this work as early as is appropriate for the child in question.

Above all else - have FUN with it!