Nope. Not THAT Bank Game ;)

Along came AMI training - total immersion for the year. Baptism by fire ;)

Well, one mystery solved: the Change Game or Exchange Game in AMI can be called other things in other albums, among those other names: The Store, Making Change, and... the Bank Game (and sometimes Bankers' Game). But in AMI, the Bank Game is specifically an elementary presentation. Confused yet? Me too! I went to elementary training straight-away afterward.

Here is what the AMI albums, when followed in sequence break down to: 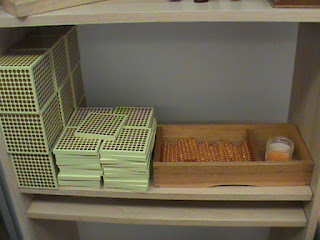 The Change Game - the first time create a tornado and a HUGE mess of golden beads; invite the children to help you count up, knowing full-well that you will have to exchange to the next category to find the final quantity in such a way that it can be found with the cards. Thereafter, this material is used for all 4 operations in a variety of fashions. The material requires 3 sets of small number cards (for the addends and for the numbers being taken away), one large set of number cards (for the subtrahend, dividend, and sums), and a set of small black numbers (could be written in black ink on small slips of paper) for the multiplier and dividend. All those cards are white with appropriate colored numerals.

This work opens up the decimal system and its operations to the child like no other mathematics material on this planet. LOVE it!!!!


Elementary:
The Bank Game uses one set of white cards that goes into the MILLIONS (up to 9,000,000 - just with no commas) - for the answer. It uses a set of colored cards with black ink that goes into the thousands - for the multiplicand. It uses a set of gray cards with 1 double-zero, and 2 sets of the numbers 0-9 for the multipliers.
There are 3 roles in the AMI album, so I can't explain the 6 roles that some of the materials boxes contain. Sorry! And the AMI albums say to  not even bother with those labels - just toss them.

If an elementary child isn't strong on his facts, he can be the runner (gets the "money" from the "vault" - at another table). The banker and customer are at a small table with the colored and gray cards laid out on a third table. The customer gathers his multiplier and multiplicand and brings them to the banker. The banker then needs to make the calculations and give the customer the appropriate "money."
(don't you wish you could go into a real bank and do that? "I'd like $6,327 and I'll take that 64 times please!" Sigh. ;) )

The banker should know his facts; the customer should be learning them to double-check the figures; the runner should also be double-checking, but if he is weak on his facts, being the runner is perfect practice.


So how we do this at home? With an only child?


I am the customer; we share the role of banker. He's the runner. It means we'll only do 1-2 problems at a time because it takes longer and we're doing more work for each person.

The frustrating thing is how often he says, "This is SO easy!" And then he stops thinking - and he makes stupid mistakes. This work was much more appropriate at age 6 and early 7; less so at age 8 1/2 even though we pull it out from time to time to review because of those silly mistakes he makes in his work.

As I said, he's older now. When he was younger, he was interested but it was a LONG work for one little boy, a work meant for 3 children. So we work together and it has to be on my time. He moans about it once in a while; or when things get tricky (meaning he's getting stuck on something he knows he should know but tries not to know), he'll say, "I thought I picked a SIMPLE problem!" (meaning, "I'm just picking numbers to get through it - I'm not really interested in this.")
(yes, I have him select all his problems. Sometimes I have a guideline - such as zeroes in the middle, or at the end; double numbers next to each other; etc. but he still selects - so it is HIS interest and HE picks up on the pattern - thus even in these grumbling moments, he is still seeing the patterns in the results of HIS chosen numbers. "Well, now I know what will happen with THAT next time - I won't do THAT again!" - and 9 out of 10 times, the next time he WANTS that challenge again! Sigh. I love 8 year old boys!)
And then he suddenly picks up on something - either related directly to his selected problem, or some other number pattern. And he's excited and interested and wants to try a few things to see if he can replicate the revelation or the pattern - even if it's just a coincidence in the numbers. Such as the problem shown below - he loved that the multiplier and the answer both ended in 1, and that the last two digits of the answer add up to 6 (the other digit in the multiplier). So then he was off doing a few shorter problem (3 digits by 2 digits) to see if he could replicate. Did not want help from me. Ok. So much for grumbling that "this is SO easy, it's BORING!" and "This is so hard, and it's still boring." He learned the word boring recently and has been using to describe everything, so I'm not entirely listening when he uses it. Boring or not, we have responsibilities - and it's not boring - as his 2 Bank Game expedition this afternoon proved!