When do you become a "writer"?


Just some musings as a variety of fragments come together over a short period of time.

14 months ago, Legoboy started a Cover Story program (writing his own magazine - middle school experience). We LOVE it, but last year wasn't a year for accomplishing much. Honestly, looking back, we were both really, really, really, REALLY burned out living in that apartment. It was hard to get through a day just fighting to be able to spiritually LIVE, let alone focus on much routine. At the time, in the thick of it, we didn't realize how bad that was. But now, looking back, the amount of time we simply spent ELSEwhere, or looking for "stuff", or getting out essential oils and herbs to deal with respiratory issues (smoking neighbors; strong perfumes on the neighbors; after a while even the laundry detergent and fabric softener smells from the laundry room below us were setting off strange reactions). Those memories are permeated with a sense of *searching* - always searching: for an item, for a remedy, for a moment of peace at 2am listening to the neighbors... do what they do at 2am (which most of the time was drinking and singing in the living room, but you know - walls are paper-thin). I suspect we were searching for peace.

That description makes it all sound so horrible. And it didn't feel like that in the moment; all 6 years of moments living there. It was a temporary place that became the longest time I have ever lived in one place, ever. Waiting and searching for a house to move into (and yes, I know MBT is waiting to hear that story).

All that to say - Cover Story took a back burner.

But now we are moved and unpacked, catching up on SO MUCH and looking forward to starting it up again next month. Legoboy wanted to start it sooner, but we have some other areas to address first.


I am totally rambling - and that is just going to be the nature of this post ;)


We follow Cover Story and One Year Adventure Novel (warning: the home page on that site opens up a video almost immediately - cute video, but auto-play annoys me) on their blog as well as on Facebook. Interesting blog topics are the norm, with highly thoughtful responses.

Recently there was a post on When Can You Call Yourself a Writer?


The general gist of how I would personally respond and what the author was getting at: you are a writer when you write your own ideas.

Copying someone else does not make you a writer.

Writing someone else's ideas does not you a writer make.

You are a writer because you write your own ideas.

So often in the realm of Montessori teaching as well as homeschooling, we have some foundational groundwork experiences that seem straight-forward, but are then interpreted several different ways, and end up with different outcomes. I am thinking particularly in this moment of the learning to write and read experiences offered to Montessori children around the world. Some use something more similar to what Maria Montessori actually did (AMI comes rather close; probably not identical; Muriel Dwyer summarizes it); some use a pink/blue/green reading scheme for the complicated English language (which makes me wonder how the AMI/Dwyer-taught children learn to read/write English with such ease, exploding into reading with joy between 4 and 5 years of age, if English is too complicated to use Montessori's method; compared to those using pbg whose children read first then write, but later - many times not until unto lower elementary... but I digress - both systems WORK, just that one feels more authentically Montessori and the other feels more adult-controlled --- if the Montessori goal is to present the keys and let the child decide when he can write and when he can read, that is all that matters for this post).

My question though is - do the children in a Montessori setting become writers from the get-go? Or do they have to be eased into it?

I make a strong case for the children are writers when they write their own ideas - when they are communicating via a written language their OWN ideas.

The AMI/Dwyer experiences allow the children to know all the 40-44 key sounds in the English language prior to starting the movable alphabet; the children can write words the first time they pull out the movable alphabet. The adult/guide/parent/teacher orients the child to the box, how to carry the box, where it goes on the shelf, how to straighten the letters. the placement of the letters within the box, how to place the letters on the mat, reviews a few sounds and invites the child to think of a word (ANY WORD! What did you eat for breakfast this morning?). Let's listen for the sounds in that word. What sounds do we hear? Say the word the child chose - he selects the sounds, and places them in order on the mat.

If the word can be (silently!) read phonetically by the adult, we do not correct spelling. We will get to the phonograms very soon. Right now, the child is WRITING. His own ideas.

The child creates a list of self-chosen words. He may ask the adult for inspiration and the adult provides some questions to generate the child's ideas.

The list is cleared away when the child's work is done; we do not have the child record his work (the adult may copy some words down, the child does not about this, as a record of work to show mom/dad at conference time - or other parent if a homeschooling family - but the child is not yet writing with pencil on paper the words, because we do not want to reinforce improper spelling, nor do we want to reinforce that everything has to be written down - sometimes the child just wants to WORK --- so these early times, we stick to the basics; let the child request to write it down on paper, or just do it on his/her own).

When the child is ready - that day, the next day? Short phrases. That orange you ate this morning? Describe it to me! "the juicy orange"
Introduce a puzzle word (the) - or wait until another day. it is ok since we are not writing this stuff on paper.
thu joosy ornj (or: thu joosy orinj - depending on dialect)
(the juicy orange --- it's phonetic, it's legitimate --- as the child has more phonograms, this will naturally correct itself)

it wuz joosy
it wuz sweet


The children are writing!


I do have strong feelings about providing the children crutches - idea cards (pictures or objects for example) for what to write, because their knowledge of the symbols of sounds is so limited that the adult feels the need to give the child success through a series of cards or pictures or books keyed to the sounds the adult has provided the child. I DO feel strongly that we should give the key sounds in quick succession so that the child doesn't NEED these crutches to have success. When a baby learns to walk, he generally has a running-like gait. Let the children have this experience with writing too! Let him run before he walks with crutches!

Not only does it give them confidence from the beginning, it provides the keys they need to write anything, thereby freeing up their creativity to GO places! Rather than writing someone else's ideas and waiting on that person to give them permission to write on their own, then having to figure out how to think for themselves.

Copying someone else does not make you a writer. Copying words that are meaningless - you have not chosen the words. You have not chosen the topic. These are not your ideas or your interests. Choose your own words of interest from the various topics presented in an authentically Montessori real-life environment!

Writing someone else's ideas does not you a writer make. Spelling out the words of pictures on cards is not writing your own ideas, your own thoughts, your own interests, YOUR writing. Draw your own pictures to write about!

You are a writer because you write your own ideas. Describe your own real life experiences. What do YOU love? What do you loathe? What brings you passion?


I once worked with a young man, age 4, going through a PBG "program" modified with G-O - giving him lists of words that met the criteria for what he already knew. He was accepting of the work, but only asked for it because he knew he "had to." It didn't seem to fill him with joy or peace - simply "ok, I did that work, now can I go play?" This wasn't my environment, I didn't control this part about the adult giving the words; I was there to fill in for the main teacher and I am happy to respect her authority, despite the drudgery of 3-4 letter "phonetic" words. For my own personal kicks one day though, I said, "What word would YOU like to write?" He said, "Really!? I want to write the word skeleton - I have been wanting to learn to write so I can write the word skeleton!"

skelitun is what he wrote on the mat.

That boy could NOT BE MORE PROUD of HIS OWN WORK. He went on to write a LOT the rest of that week - all of it was phonetically correct, he did need some sounds given to him (he didn't know some of the key individual letters yet, but his teacher already had him writing with the movable alphabet - so he would ask me, "what is the letter for the sound (fill in the blank)?")

That day, he became a writer.

The lead teacher didn't seem too enthused. I felt like saying (but didn't) a slightly different rendition from the Frozen movie, "Why are you holding back such a man!?" Such a writer! This kid was creative! 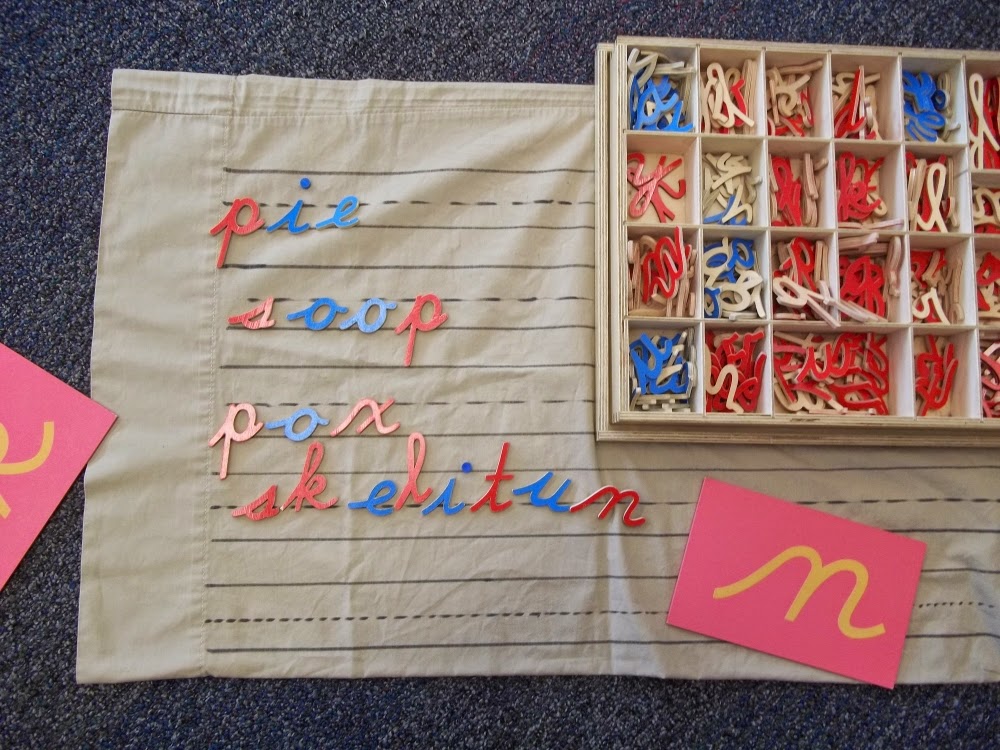 I wish I had permission to publish his adorable SO PROUD smile.

Click here for a link to the Montessori Trails page correlating Dwyer with AMI with Pink/Blue/Green - aligned next to each other according to stages.