Here is yet another work plan that we have used. This one has lasted the longest, but I am seeing the need to move away from it for a bit; try something different according to my son's current needs (described in previous posts, such as this one)

This was inspired by my long-term subbing work in an upper elementary classroom, but for us it worked well for two years of lower elementary.

I used the first page to fill in our current resources - the sample here is a generic one I set up with not too much on it. At various times we have used various resources to pursue particular interests such as astronomy books, math books, science kits and more. Sometimes I would do this on the computer and print it out for myself; other times I would fill in a blank one for myself with our resources and goals. This chart might last ME anywhere from a month to a semester-ish. 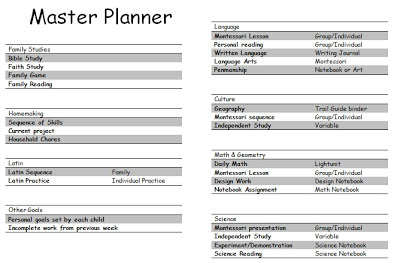 Then the blank page, I printed 2-3 on one side, then one less than that on the backside. They could then be folded together to make a booklet for the 'month'. Legoboy got lots of practice writing in the dates for the week up above. He also could decorate the cover and the back; or leave space for additional notes.

We would fill in the information needed for the week; he used the small boxes on the right to check off when he was done. If something needed daily practice or more than once a week, we'd draw that number of squares next to the activity so that he could check each one off as he did it, filling the main box when all was done.

What do we write in there? It might be the page numbers of something we are reading together or the name of a book he wants to read on a subject; it might be "new presentation from mom";

The blank space at the bottom left was used for recording his commitments, such as choir, speech, atrium.

Yes, for us, in our situation (work at home), I felt the need to include even our family stuff - so for *us* this work plan was really more of a "family planner" for the week. Most families just need a work plan for the school hours; but this kept us organized in all areas ;) 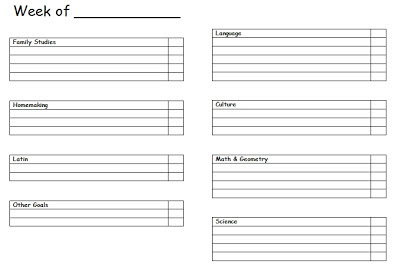 He didn't do every subject every day, and over the course of a month, various weeks might be very light in some areas and heavier in others. The goal was proper pacing and planning.

At the time we put this in place, I intended to start having by-the-clock work periods. It never actually happened. We have our routines, and work periods fit in there, but they are NOT by the clock by ANY means ;) Thus, rather than say "the work period is over, you may choose to continue working or you may have free time" we had to work things out by day so that he knew when he was "done" regardless of how long it took. Many times he still would do more, but sometimes he was ready to be done for the day.

Each morning (or the evening before), we would mark the upcoming days' items with the letter for the day; we would discuss his current work and what he wants to do next and I guided him in learning how to assure he gets both his interests and his responsibilities in. These two items are NOT exclusive of one another - my requirement might be to do something with history this week (could be specific, could be vague), his interest in ancient history means that almost everything he does is history - he just has to record it as such.

And no, I didn't make a huge deal of him not finishing a particular day's works if he was working deeply. If I didn't see him truly working, then I would comment that he chose not to work well that day, it would mean more work the next day.
(note: if you've not quite noticed yet, I'm a single mom; while what I just said above might sound a bit "harsh" to some, the fact is, I have to provide a lot of that "boundary" stuff in a way that doesn't come natural to me; by having just such conversations as I just now mentioned, my son is aware of his boundaries, aware of the consequences both good and bad, and it is really starting to show through his work on the tae-kwon-do STORM team - a bragging post for another day ;) ).


Definition of true work: diligence, depth, interest (even if the interest is a "requirement"), appropriate breaks as needed.

If you are interested in a Word (.docx) file of the above shown items - entirely adaptable to your own use, here it is:
Montessori Homeschool Planner