Short Division and Long Division with Racks and Tubes

In primary, we give the children short division on the racks and tubes (test tube division). They use just the units board, dividing a 7-digit dividend (into the MILLIONS!) by a 1-digit divisor. This would come after their experience with the wooden hierarchical material (golden beads on steroids - it goes into the millions!).

Children CRAVE big numbers - and using big numbers gives a great deal of repetition without it being a worksheet drill.

We write the problem in a linear fashion at this level. The focus is on the sensorial experience of short division. Only one board is used (for the 1-digit divisor). 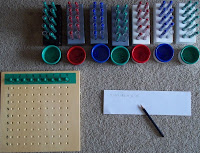 In elementary, whether they have done that work or not, they move into the racks and tubes fairly early (assuming a mostly full primary experience), using a 4-digit or 5-digit dividend and a 2-digit divisor. They then  make up their own problems with as many digits in both dividend and divisor as the material allows (7 is the max for the dividend; 4 for the divisor).


Some of my son's work when he first began this work at elementary:


He then extended into his own problems, including 3-digit divisors and just being plain silly.

3,457,486 / 9 - just to prove to himself he could do short division. I modified one of the digits to be sure there would be no remainder (a great control of error in the beginning)

9,999,999 / 99 - his first completely on his own (he was surprised at this answer!) - he only needed reminder where to place the answer; otherwise he covered all the steps himself.

This was ONE afternoon, not even the entire afternoon. How many 1st grade worksheet problems is this equivalent to? For most curricula - NONE. They don't do division in 1st grade. But for the sake of counting it up anyway, I'm still not sure - how do you quantify the number of individual division problems in 8,222,743 / 1,234 - technically, there are 4 distribution steps, but over 4 boards each time. Essentially we are looking at 12 division problems, but there is also the sensorial understanding of how it all works that just doesn't come from facing a worksheet of repetitive math problems.

My son made these numbers up himself. They mean something to HIM. And in these 4 division problems he has covered the concepts of 3 years of division work by most curricula.

And that's only exercise 1. Follow-up exercises introduce the writing out of the problem in stages.

HOW TO CHOOSE A DIVIDEND WITH NO REMAINDER:
You can see a lot of my own writings - helping him to find a problem that had no remainder just for the sake of focusing on a different skill at that particular moment - choose your divisor and quotient and multiply them; this provides the dividend; just don't share the quotient with the child until they've discovered it themselves - for some children this is like MAGIC! It's a fun game to play - "I have written a number on this piece of paper, I wonder if you will get the same number if you divide out this really large number, but I'm not going to show you until you've done the work - we'll see if we get the same number!" (if the child makes an error in the beginning, ah well, the numbers don't work and the magic wasn't active that day) :)

LONG DIVISION IS JOYFUL:
This work brought a lot of joy on an otherwise very rotten day. Who'd've thought that long division brings JOY!? :) This was big work, it was meaningful (he turned it into food distribution for a king whose populace were facing a drought and had to come to the king for a fair amount of food), it was long, it was challenging, but he was ready and capable. He was playing a game with numbers and finding some patterns.