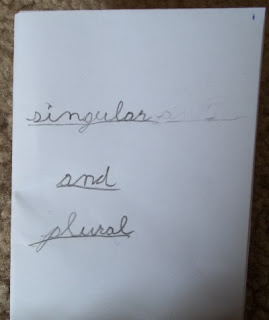 My son asked me to share a sample of his singular and plural noun booklet from last year.

With the study of the grammar boxes, there are many follow-up presentations for the article/noun box (grammar box 2), the adjective box and the verb box in particular.

For nouns, we have noun number (singular and plural), noun gender, noun classification of abstract, concrete, material, collective and the 3 types of abstract nouns. Number and gender can come just before or after presenting grammar box 2 (usually after), while noun classification comes at around 7-7.5 years old or at least a few months after presenting the other noun material, giving the child time to assimilate and an opportunity to come back and review those nouns.

As my son can attest, it is not necessary to do ALL the sets in a particular album page, let's say noun number, before moving on to noun gender, the next grammar boxes, and other language studies. Just exposure is necessary - there is plenty of time for review and follow-up. He likes to do things to completion in order, but even with these, I think we moved on to noun gender before finishing up the number cards.


Without further ado, here is something my son put together of his own accord - a booklet describing the rules for singular and plural - 1 rule per page or pair of pages. The translation (since he abbreviated) is in the caption. I tried to keep his punctuation and style - just writing out the words he abbreviated.

Other things I've seen children do: create a chart or list of the rules; just state them aloud; explore more nouns that fit within each rule (we do NOT give them every example within a particular rule); create booklets of words; create additional card material.

For our material, I broke with the rules a bit. You are supposed to have a few sets of cards, then the remaining noun number sets are in booklet form for the child to study. I found it easier on me as a work-at-home single mom to just make cards of all the material; then my son (who loves booklets) makes his own and illustrates - so the singular is on the left side of the page and the plural is on the right side, and there might be two words and pictures on the left, with the corresponding words on the right. He then extrapolates the rule and writes it on the last page. If you make booklets, you'll make them as I just described, and still invite the child to extrapolate the rule (not necessarily the first time through, but they tend to be pretty quick with these).

How was the booklet made?
Take a regular sheet of printer paper (you don't want paper too thick for this or it won't fold right).
Fold it in half, unfold and fold it in half again the other way (making 4 section on your paper).
Now take the short side and fold it into the middle line; repeat with the other short side; unfold everything.
You should now have 8 sections - if you are holding the paper vertically (as if reading a printed letter), you will have 2 columns of 4 rectangles that are horizontal (longer than they are tall).
The tricky to describe part: see that long line you folded down the middle? On either side of that line are 4 pages; you are going cut ON that line just in the middle 2 section. So if you are still holding that paper vertically, your top row will be uncut, your bottom row will be uncut, but your middle 2 rows will be separated on the crease with a vertical cut.
Now fold the paper in half ON that line that you just cut. If done right, those middle pages want to "poof" out. Let them.

Ultimately you have 4 double-thick pages kind of in the shape of an x or a cross. Just fold them along their creases (don't create any new ones) and you have a book. I find I have to flip the pages around a couple of times to find the most "comfortable" fold so that nothing is sticking out at an odd angle.

Want a longer book? Make two or three of them, and glue them front to back. My son used two for his Singular and Plural Book.