(tiny break while Legoboy finishes writing the next post)

While he didn't ENTIRELY pass his belt test, they did still give him the blue belt with a white tape on the end; he re-did the last few requirements the following week and had the tape removed; he handled it rather maturely, while obviously visible disappointed in himself that he didn't get a "full" blue belt at the test day itself. He knew he'd not practiced well enough - and the requirements to perfection get stiffer as belt rank increases. It was a very good lesson!

The difference between full belt and tape? He can't learn the new stuff for the NEXT belt until he gets the tape off. He's there now (full belt!) and so relieved. The instructor even went out of his way to pick him up and take him to class (and return him) on a day that Legoboy was available to attend but I was not available to transport him. (please note: the instructor is one of our neighbors, so this isn't as strange as it sounds)

The belt test itself:

Leading a portion of a class during the week afterward; and helping with a transfer student who is also a blue belt (not all schools have precisely the same requirements for each colored belt - black belts are all the same though; so Legoboy was asked to transition the boy into the requirements at this school). 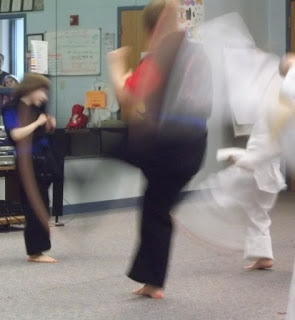 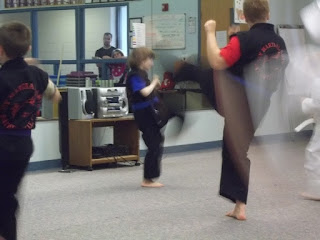 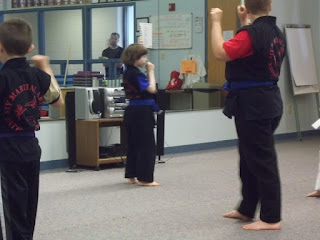 So what's the deal with the uniforms you ask?

The white uniform is the usual uniform for all tae-kwon-do students at this school. The black uniform is used for those people on STORM Team (Special Team Of Role Models) - for those who are at least green belt (about a year in, if testing is done as quickly as possible) and under age 18. It is a team that has higher standards even than TKD; requirements about participating in demonstrations, attending tournaments each year, maintaining higher grades than the usual TKD kids, and other such requirements. At THIS school, if you are under age 18, you can only learn a weapon BEFORE black belt, IF you are on STORM team. Legoboy was the first one to join the team under age 12, and with more children around his age just coming on to the team, they set up a "Junior" STORM team, with similar but not as stringent requirements. They wear blue t-shirts under their uniform; regular STORM team wears red t-shirts.
(Legoboy's expectations are closer to that of the regular STORM team, since he was on the team for 6 months before the other children came up as the ONLY Junior STORM team member -- just how the enrollments worked for those couple of years).

Black belts (when not on STORM team) usually have the white uniform but it has black trim on it; black or white pants.

Any t-shirt is allowed underneath (including no t-shirt), but I don't like exposed chests, so the household rule is to keep it covered in public and white goes along nicely with the white uniform.