I love the dot game - I don't know what it is - all the dots maybe? Nah - it's the organization of it - the beauty of it - the essential teaching of it!

And it is the one time that markers are typically used in a Montessori class - if the dot game is kept in a glass frame or laminated and mounted - the children can use a dry erase marker and eraser and use it again and again!


Legoboy did it at school, and wanted it to do it at home (that year I alternated subbing at Montessori schools and working at home - and homeschooling - it was a crazy, but wonderful year!) --- well, I just printed it out and he filled it in. We downloaded this version from Montessori Materials - a great place for some of the printable materials.

Then I had to print more - because he just ate it up!

Here is his first one... It's so pretty! I wrote the first set of numbers and everything else was on him. 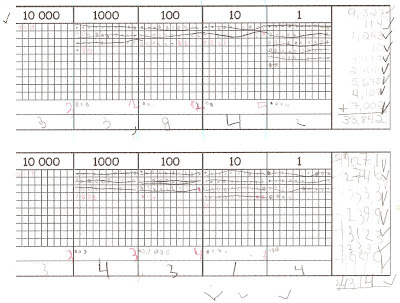 The children check off as they do a row, so they can track where they are. They connect up the dots to create a "bead-bar of ten"; then carrying over is noted in red the first several times they do it, to really reinforce the extra work that goes into carrying. But these are all concepts that are actually KNOWN - the child has been doing this work throughout use of the golden bead material - for Legoboy, it had been almost two years with the golden beads, probably a year and a half with carrying, before he actually did the dot game.

Montessori works in baby steps - so there are only two new things here:
This material is only used for addition although multiplication could be done on it. There is more other work for the child to do and the point here is the two points listed above. So further operations are not necessary.

By the 3rd sheet of this work, the Dot Game turned into a balloon popping game - pop 1, pop 2, pop 3, etc. until number 10 was the biggest POP of them all!

oh the days when it wasn't about battles and weapons.... it just balloons popping! How I miss those days ;)