Catechesis of the Good Shepherd

As I reflect on the letter I received today (I am typing this on Friday afternoon), I thought I'd share some thoughts that answer some private questions I receive from time to time.

Basically, these questions center around the relationship between Catechesis of the Good Shepherd and Montessori education - for US. In OUR family. 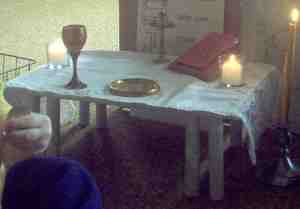 Quote from the acceptance letter:


"With your great Montessori background, it's easy to want to include many wonderful materials in the atrium, but especially in an atrium used for training, we need to be true to Sofia and Gianna's understanding of the essential."


I appreciate what is said here, but I have some concerns as well.


Some interesting tidbits on the relationship between CGS and academic Montessori - or how Montessori can and SHOULD apply to CGS:

In all other aspects, CGS is separate from the academic Montessori, which includes something good and beautiful (we call it Cosmic Education ;) ), but is separate from CGS in that Catechesis of the Good Shepherd is theology at its richest and deepest.

I recognize what I would be doing in a formation course; but I wonder how I would go about assuring that stronger, balanced Montessori foundation.

Again, though, CGS has impacted how I do the academic portion of Montessori far more than my Montessori background will ever impact CGS.

Email ThisBlogThis!Share to TwitterShare to FacebookShare to Pinterest
Labels: catechesis of the good shepherd