What if the world stops turning????

I've also always made a point of saying, "When the earth faces the sun" or "turns toward the sun" or "the earth has turned away from the sun" - rather than referring to the sun doing the movement.

I've just always wanted to be very accurate with my speech. 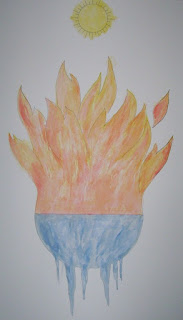 So one day, my just turned 6 year old son, comes to me a little while after some now-forgotten incident that prompted me to say, "It's not like it's the end of the world!" and asks, "What if it is the end of the world? It will stop turning! What will happen then!?" He was curious and thinking - now at the elementary age (second plane of development) of not just accepting everything on factual statement, but wanted to understand WHY and WHAT IF and HOW?

So, out of order from all elementary geography presentations, I said, "Ah! I have a chart for you!" This was his first official chart presentation, though he'd seen me painting them previous to this time.

We talked about it a bit. "What do you see here?"
"If this is the earth, where is this side facing?" (pointing to the flames)


Now in the time since then he's had the "usual sequence" and we've come back to this chart in the proper scheme of things.

It means something different for him than the children who only just saw it this year (in proper order); but every child took away what they needed, and brought to the conversation at their level, contributing to the growth of understanding in all the children.

No, I would not show this to a child in the first plane of development - it might instill fear of the unknown and the what-ifs because their minds work in the concrete, right-now, here in the moment. We do not want to instill fear into a child, but trust, at this age. In the second plane, the child has a strong foundation and can contemplate the what-ifs in a realistic manner without inappropriate fear.

It was ok that my son saw and discussed this chart out of order; our presentation did not follow the typical album page, because he'd not had the typical pre-requisites. Just because he'd not had the pre-requisites did not mean he was not ready! He was ready in a different way; and at the proper time, he was ready in another way.